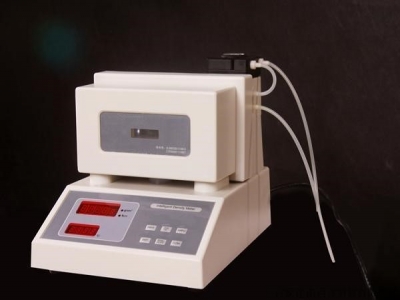 The KR12D automatic constant temperature petroleum density meter is suitable for measuring the density and relative density of liquids. This method measures the density of liquids according to the principle of different oscillation frequencies when the double U-shaped tubes are filled with different media. It conforms to GB/T2013-2010 and GB/T29617- 2013 and SH/T0604, ASTMD4052. After pumping the liquid to be tested into the resonant cylinder sensor, the single-chip microcomputer will process the measurement data and automatically measure the density value of the petroleum product. It is composed of double tuning fork density sensor, vibrating tube circuit, temperature measuring circuit, CPU, display, constant temperature bath, liquid inlet pump and control panel. This liquid densitometer can be widely used to measure the density of various liquids, and with different concentration conversion software, it can also directly read the concentration value of the corresponding liquid, such as alcohol. Through the processing of the single-chip software, the volume concentration data can be directly read , The test is more convenient.

2. Directly display the density value of the liquid at 20°C, and display the temperature: the oscillation frequency of the sensor is detected by the single-chip microcomputer, and the mathematical model of the relationship between the sensor frequency and the density of the liquid is used to obtain the density value of the liquid, and then perform floating point calculations. In the operation process, no additional error will be caused due to insufficient operation digits, and the accuracy of the measurement result is guaranteed. The density value calculated by the single-chip microcomputer is displayed through five digits, and there is a temperature display window.

3. Automatic sampling: The single-chip microcomputer controls the stepping motor to drive the peristaltic pump to suck samples, which improves the degree of automation of the product.

5. Data storage and transmission: Built-in storage chip, can store 80 groups of test data, and can be recalled and deleted. It can be connected to the computer through the 232 interface according to user requirements (customized).

6 Calibration function: When the instrument is not used for a long time, it will drift. This instrument can use 20 ℃ pure water as a standard to calibrate the instrument. This is a function that the glass density meter cannot achieve.