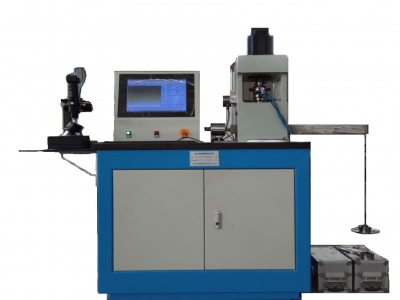 The lever four-ball friction tester is in the form of sliding friction and is mainly used to evaluate the bearing capacity of lubricants under extremely high point contact pressure conditions. Including the maximum non-seizing load PB, sintering load PD, comprehensive wear value ZMZ and other three indicators, in actual applications, different evaluation indicators can be selected according to the various uses of the lubricant. The ambient temperature of the test engine oil box can reach up to 250°C, and can be pre-selected for time, friction, temperature, etc., and can also determine the friction coefficient of frictional parts.

The testing machine is mainly suitable for the evaluation of lubricating oil. It has a wide range of application prospects in various professional fields of tribology, petroleum, chemical, energy and other industries, universities, research institutes (institutes) and other departments.

The testing machine is mainly composed of spindle drive system, weight lever system, oil box and heater, friction measurement system, industrial integrated machine programmable terminal (which can realize the preset and control of friction, speed, time, temperature and other parameters , Alarm, display), electrical control system, strong current system and other parts, they are all installed on the frame with the base as the main body.

The main shaft is driven by an ESTUN servo motor and an AC servo system. The rated power of the system motor is 1.5kW, the speed adjustment range is 200～2000r/min, and the speed is stepless. The spindle speed accuracy can reach ±10r/min.

The lever weight system consists of a knife bearing blade, a lever and a hook weight. The lower knife bearing is supported by a double knife bearing, so that the lever transfers force more smoothly and accurately. The lower supporting blade is the fulcrum of the lever weight system, and the force transmission blade transmits the force applied by the lever system to the oil box and the friction pair. The knife-edge hook improves the accuracy of force transmission and is placed at a suitable lever ratio position as required.

The guide part under the oil box is equipped with imported linear bearings, which reduces the friction between the oil box seat and the main body and makes the test force value more accurate.

When the steel ball friction pair works, due to the axial pressure, the friction torque is generated when the main shaft rotates. The friction force arm and the friction force sensor generate a small unbalanced signal corresponding to the force. The measurement system displays the value of friction.

The electrical control system adopts modular control, strong anti-interference ability, stable performance/parameter setting, operation, calibration and other operation interfaces. Various operations are completed on the industrial integrated machine. The setting interface can realize the setting of test conditions, and the running interface can carry out test operations. Real-time display of test data, such as friction, speed, temperature, time, etc. Various relevant curves can be displayed, and the test data can be analyzed and processed.